Welcome to the CEO blog. This section is inspired by the CEO Ulrich Spranger of the Jarltech Group. 30 years ago we were already facing the critical situation that our ozone layer had dangerous holes. But what does that actually mean?

What is the ozone layer?

The ozone layer is located at an altitude of 15 to 50 kilometres above the earth, in the so-called stratosphere. The earth’s ozone layer is able to shield a large part of the UV-A and UV-B radiation from the earth by absorbing it. In this way, excessive warming of the earth’s surface can be prevented. Chlorofluorocarbons (CFCs) and nitrogen oxides are released into the atmosphere by humans. These cause ozone depletion in the stratosphere, where ozone is converted into oxygen. The reduced ozone concentration increases the passage of solar radiation in the ultraviolet range. This leads to numerous disorders such as eye diseases, disturbances in photosynthesis or changes in the food chain.

Ozone is pure oxygen, but in a rather unstable form. In its unstable state it has the ability to trap ultraviolet light – such as sunlight. These rays are so dangerous because they can cause skin cancer.

Under the agreement, the use of such substances has been significantly reduced and continues to decline 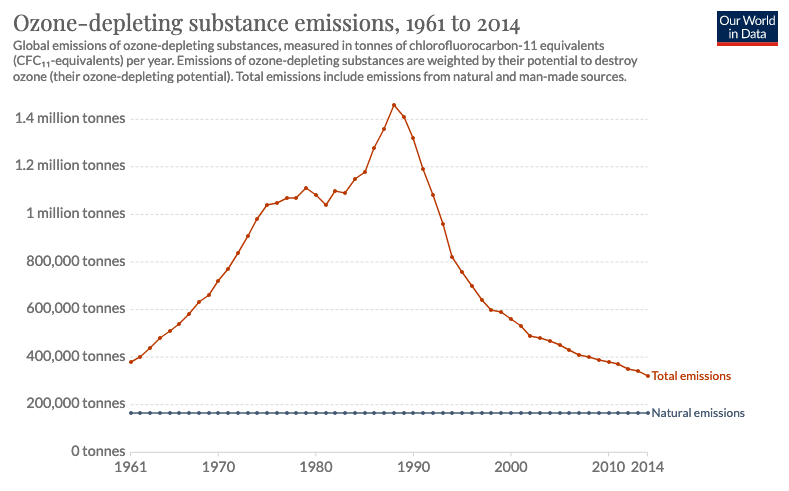 Can we learn from this?

We are still facing major challenges today. And everyone must do their part. A great inspiration for me is a statement by Carl Berninghausen, CEO of Sunfire GmbH and investor in the sustainable start-up Sono Motors:

“Well, I believe that we all have a responsibility to make a difference, each generation in its own way. The very young create the awareness for the change that comes next from the generation of Sono’s founders. They have the power and the new ideas and they can really make the change happen. And then come the shareholders and the supporters. They have to use what they have created so far to provide the means for these ideas to be implemented. Everybody has to make his contribution.”

We as WEROCK count ourselves as part of the “Generation Sono” and want to contribute so that our planet remains a worthwhile place to live for future generations. As part of our sustainability checks, we question the business practices of our Asian suppliers in order to reduce and ideally completely avoid climate-damaging emissions. We offset all greenhouse gas emissions that cannot be avoided by our company, both for ourselves and for our products. However, our aim is to reduce these emissions to a minimum. Avoiding is better than compensating.

We use cookies to ensure that we give you the best experience on our website. If you continue to use this site we will assume that you are happy with it.OkPrivacy policy